Fanya Mambo Foundation is a Kenyan grassroots non-profit organization that works with communities around the country, helping create educational and economic opportunities for unemployed youths and disadvantaged community members who may not be covered in development activities. We achieve this through identifying problems and modeling sustainable solutions aligned to the various problems identified in the housing, environment, agriculture, water and sanitation sectors.

Through this, Fanya Mambo enhances poverty eradication, environmental consciousness and the idea of a crime free society. Specific objectives of Fanya Mambo Foundation:

Since inception, Fanya Mambo has been actively involved in educating and sensitizing community members & schoolchildren around the slums of Nairobi and other urban set-ups on the importance of proper environment management. This is done through the Fanya Mambo Program and the Children Recycling Plastics Program: programs designed & proven to improve urban landscape in Kenya by training people on how to recycle used plastic and building needed educational and civic projects using Eco-blocks (used plastic bottles stuffed with used plastic bags).

Examples of such projects already built are; benches for school programming and meals, educational shelters, and security walls utilizing Eco-blocks as the main building material. To date, Fanya Mambo has worked with over 4,000 Kenyan school children in Plastic Recycling Projects.

So far the Organization has the approval and endorsement of the Education and Environment Departments of the City Council of Nairobi and the National Environment Management Authority (N.E.M.A). Fanya Mambo Foundation has so far partnered with several other organizations, including U.S based aid organization Solace International, the Lamu based Island Children Fund, and the 1% Club from Netherlands, in implementing several projects in Kenya.

The Swahili phrase Fanya Mambo which means “doing things” and our slogan “everyone can do it” remain our guiding philosophy and inspiration while implementing our projects. This enables us to model sustainable solutions that are simple and effective in tackling even the most complex problems that plague the developing world.

By providing the much needed but hard to acquire knowledge on simple but vital basic survival skills that are normally not taught elsewhere within the country’s education system, Fanya Mambo plays a very important role in ensuring food security and financial well being amongst the poor and the disadvantaged.

Fanya Mambo Foundation strongly believes that through practicing and training people on environmentally friendly agriculture and construction methods, nurturing and promoting the untapped talent on music, arts & crafts amongst our youth and training individuals on basic business management skills, most of our world’s pressing problems will be few and far apart.

Benjamin Odera brings to the project vast experience and international exposure in project management and implementation garnered through his work as project manager for Solace International, a US based grassroots aid organization, in Kenya and Guatemala.

Currently based in Alaska, USA, where he works as an engineer, Chase uses all his vacation time to volunteer his skills and knowledge of appropriate technologies with various projects worlwide. Chase brings experience and international exposure in project management and implementation from his work as engineering work with Engineers Without Borders.

Chase is currently developing the blueprint for the Fanya Mambo Center’s rainwater harvesting and storage, as well as the water pumping system from the stream and irrigation of the gardens.

A capable supervisor and team leader, Raphael is a hard worker with the passion and competence to learn new construction techniques with ease. With widespread international exposure, Raphael is a great asset to the team and has the ability to interact and work with people from all walks of life.

A special education teacher by profession, Vincent is charged with formulating all educational programs under Fanya Mambo. Vincent is also a founding member of the Fanya Mambo Foundation and works closely with the construction and agriculture managers in ensuring that the education systems at the Fanya Mambo Center are top notch and effective.

David is fresh from completing construction on the only medical clinic in Malaal, South Sudan: on a voluntary basis. Up until the completion of the clinic in February 2013, David was attached to the non-profit organization Alaska Medical Sudan Project (ASMP).

Fanuel is a founding member of the Fanya Mambo Foundation and its current chairman. He doubles as Fanya Mambo’s logistics manager whenever Fanya Mambo embarks on a project. Hailing from the project area, Fanuel is the link between Fanya Mambo and the target community, ensuring community participation and project ownership.

Armed with vast experience in the performing arts sector from many years at the core of the Kenyan Entertainment Industry, Fanuel brings to the fold much needed guidance and direction when it comes to identifying and nurturing young upcoming talent.

Joseph communicates with all individual and group volunteers. He welcomes everyone into the Fanya Mambo family and gives a guided tour of all our projects. Joseph works closely with all other Fanya Mambo team members to ensure that every volunteer’s time is as productive and worthwhile as possible.

Educated at the Rongai Agricultural and Technical High School, Muikia was the head of the poultry department during his school years and got hands on training and experience in general agriculture and Farm Management. He is a founding member of the Fanya Mambo Foundation and is set to put his experience to use at the proposed premier Fanya Mambo Center as the general Agriculture Team Leader.

How We Do It

In construction, Fanya Mambo promotes and train people on affordable alternative environmental friendly methods such as: 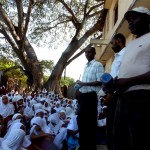 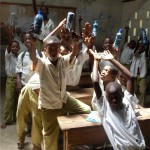 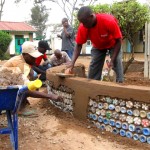 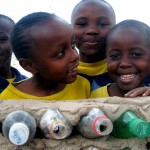 2. FERRO-CEMENT CONSTRUCTION; A construction technique used to build affordable heavy-duty water storage tanks and structures utilizing fiber reinforced cement mortar and rebar. Ferro-cement construction counters the problem of deforestation as it utilizes almost no timber at all, is affordable and the final product is capable of lasting decades, if not centuries.

3. EARTHBAG CONSTRUCTION; A technique that utilizes almost no timber while building tested and proven Earth-bag houses, capable of lasting decades, if not centuries using only polypropylene bags and soil as the major materials. Structures built using this technique are low cost and are known to be better earthquake resistant than other conventional techniques.

4. RAIN WATER HARVESTING; Proper Rain water harvesting and storage systems for both household use and agriculture.

In agriculture, we promote and train people on appropriate farming techniques such as;

1. INTEGRATED FISH FARMS; Incorporating fish farming with other types of agriculture such as chicken rearing, duck or gees keeping and sheep rearing plus vegetable farming. The advantage of this type of a fish farm is that all incorporated aspects of the system are interdependent on each other positively. In the end, this helps farmers in bringing down production costs drastically while improving nutritional value of the end produce. 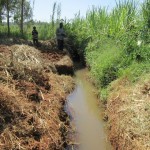 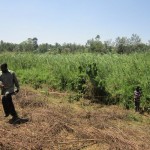 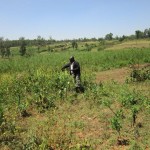 2. PUSH PULL SYSTEMS; Environmentally friendly agricultural system that is deliberately designed to eliminate weeds and pests without using chemicals while still ensuring the improvement of the soil’s fertility.

5. FARM PONDS; In areas that experience short rainy seasons, we promote the creation of farm ponds for harvesting and storing rain water that is then used to irrigate the farms during the dry season.

Other areas that are central to our training system are:

BASIC BOOK KEEPING AND BUSINESS MANAGEMENT EDUCATION; Every individual that pass through Fanya Mambo gets education on basic business management and book keeping. This is the key pillar as it enables all the trained individuals to actually set up proper ventures upon acquiring the requisite knowledge on any of the pursued skills.

MUSIC, ARTS, AND CRAFTS TRAINING; Trainees and community members talented in music, arts and crafts gain extra training under the very capable leadership of Fanya Mambo’s crew members who are masters in their own rights on these fields. Benjamin Odera (aka Banze), the Founder of Fanya Mambo Foundation worked for Solace International as a project manager from 2007 to 2010. During this period, Banze had the opportunity to do community work in his home country Kenya and also in Guatemala. In Guatemala, he was the project manager in charge of the creation of an orphanage home (Casa Del Nino) in the Department of San Marcos. While there, he noted that one of the challenges the locals were facing was lack of knowledge on the benefits of proper waste disposal initiatives and the dangers caused by the rampant careless disposal, to them and to the environment. This meant that all household wastes including raw sewerage were being disposed into a nearby river and not all was being washed away, others spilled over the riverbanks especially the light plastic bags and PET bottles and in the end finding their way back into the neighborhood.

Leading the Solace crew on the ground, partnering with an Organization called Project Seres and working closely with the locals and school children, he decided to initiate a program whereby, community members and school children got educated on what is plastic pollution and the dangers it poses to both the environment and to human health. They also gained education on the importance of recycling and encouraged to start and continue recycling. Used plastic bottles and bags would be collected and brought to the orphanage home and in turn used for construction work. Locals responded well and started recycling and doing construction work using used plastic bottles and bags too! This reduced highly the plastic pollution levels in their environment. Upon returning back to Nairobi, Kenya, Banze found the same problem of improper waste disposal like the one in Guatemala only that this was now more serious because the city is densely populated and produces over 200,000 metric tons of waste everyday (20% in form of plastics). With most residents living in slum dwellings with no proper drainage systems, you find huge piles of uncollected garbage spilling over into the drainage systems, choking and blocking the drains in almost every neighborhood. This results in unsanitary stagnant waters all over, acting as breeding points for deadly diseases. While it is a fact that 20% of the disposed garbage is plastic waste, most residents don’t know how to dispose the plastic safely, most people still burn them, oblivious of the fact that, if burnt or melted plastic produces highly toxic fumes that cause untreatable diseases such as cancer. Others that are not burnt end up choking the drains and are still responsible for the numerous waterborne diseases outbreaks in the city.

This is what motivated Banze to do something (Fanya mambo)! With startup funds provided by Solace International, a program that seeks to educate community members and school children about recycling and the possibilities of transforming common waste into useful structures was initiated. Based around the 3Rs of Recycling, the Education Program is centered on sustainability and encourages habit change for children, parents and the communities by encouraging separation of waste at source. Over time, the program has evolved into a registered Kenyan Non Profit Organization and has diversified into being an organization that initiates sustainability and empowerment strategies for youth and disadvantaged community members.
Home   About   Projects   Blog   Donate   Contact